My little sister, Ellen, has been on a path toward becoming gluten- and dairy-free, which has significantly improved her health issues. When she cooks for herself and strictly monitors for cross-contamination, the golden age of GF living reveals all its rewards. One smidgen of gluten though . . . and she’s a goner. When we were together at Christmas, I told her I’d work on a cheat sheet for quick grocery store purchases and safe items at the restaurants she has access to. Many of these are based on what’s close to my office as well–crappy fast-food where I am able to find gluten-friendly fare. I don’t condone a great deal of eating out, especially at fast-food restaurants, because home-cooking is really the only way to monitor quality of ingredients, but reality is that I will be too rushed to make my lunch two days out of the week. It’s good to be aware of my g-free options, even if they aren’t super healthy. (Links below are to the allergen pages for each restaurant/manufacturer so you can scope out the menu items that will work best for you.)

Next time around, which will likely be in three months since that’s the frequency of posting I seem capable of, I’ll get together a list of my favorite gluten- and dairy-free bottled salad dressings–another of the challenges for someone new to this lifestyle change. (I promise I won’t wait that long, sis!)

Yesterday, I got home from an amazing vacation. Planes, trains, and automobiles (and even a ship!) took us on a nearly 8,000 mile roundtrip vacation. We saw glaciers, seals, redwoods, the Golden Gate Bridge, Alcatraz, and a whole lot more as we traveled through Alaska, Canada, Washington, Oregon, and California. I could talk about it for days, but for the moment, I’ll just share what I ate. And that was a lot. 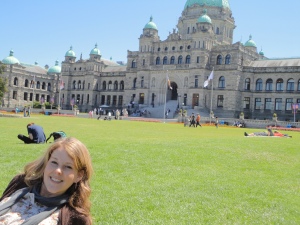 This is me in front of Parliament in Victoria. One of the rare moments I wasn’t eating.

In twelve days, I gained about six pounds. (Yikes!) My feeding frenzy started on a cruise, but truthfully, I think a gluten-free diet could successfully be done there. My mom pretty stringently stuck to a gluten-free diet (minus a couple cheats), and the crew was very accommodating. They took her order the night before for each meal, so they could prepare her food in a separate pan. Although the selection was not tremendous, the buffets were labeled with gluten-free options, and there was even gluten-free bread available. (It wasn’t as good as Udi’s, but it was nice to have.) Even I did okay in this portion of the trip. I cheated, but it was typically purposefully and not with complete abandon. I ate lots of meats, eggs, rice, potatoes, as much fish and seafood as I could get, fruits, and veggies. The key here was I ate A LOT. The A LOT happened to include a lot of healthy stuff, mixed in with more special-occasion cheating than normal.

Traveling off the ship was another story. For our first lunch I was golden. Chicken, rice, and salad. Then we got on a train. We were supposed to be on the train for about six and a half hours. We were going to eat a very late dinner when we got to Eugene, but twelve miles south of Portland, we got stopped behind a broken down freight train for two and half hours . . .

Have you ever eaten in Amtrak’s dining car? If there’s a fancy one, it wasn’t on our train. Chips, candy, a couple sandwiches, and microwaved dinners were on the menu. They did have some Tillamook cheese, though, Oregon friends! That was our snack before we realized were going to have to eat supper there too. Turns out they didn’t have any gluten-free microwaved cheeseburgers on that particular train.

After we picked up our rental, somewhere in the vicinity of 1:00 a.m., I scarfed down a sandwich from McDonald’s. There were a few healthy bites along the rest of the trip, but mostly, I got rather lazy. I have the privilege of not having to be gluten-free, so if I decide to inhale a bowl clam chowder, and the bread bowl it came in, I can do so, and it mostly only affects my waistline. However, my laziness aside, there were several situations that made gluten-free eating pretty challenging:

1. Traveling via plane and then continuing travel without access to a refrigerator.
2. Being stuck on a train. For a long time.
3. Road-tripping through rather remote parts of the country. I would not have considered northern and north-central California remote until we drove through it. One day I ate Ho-Hos and Pringles for lunch. Again, lazy, but in my defense, the Shell station was about the most enticing place I saw between Fort Bragg and Mendocino. Who knew??

Do you have gluten-free vacationing tips? If so, I would love to hear them. My mom is probably going to have to undergo some more testing, but she has a new doctor who is convinced she has Celiac, and I really just tend to feel better without gluten. As much as I enjoyed some of my indulging, I’m looking forward to getting back to healthier, more balanced, and gluten-free eating. Please share your tips! I’d love to hear them!

On yet another road trip, I was pretty thrilled to discover that Wendy’s now offers baked sweet potatoes as a side. I’m currently on the dreaded phase one, minus apples, bananas, melons, and gasp—all sweeteners. But, as a trade for apples and bananas, Dr. Jana said I could have sweet potatoes and quinoa.

I’m happy to report; it was delicious! I didn’t put any of the cinnamon butter or their “buttery spread” and it was still very good.

We travel pretty regularly, so another gluten-free fast food option is fantastic.

Not that I’m above cheating. Stay tuned for my confession of my glorious weekend of fail in Chicago. Cheating at the Italian Village in Chicago is far more rewarding than cheating at Wendy’s.